Although many Americans vowed to become better tippers because of the financial impact of Covid-19 on service industry employees, new data from CreditCards.com shows they have failed to follow through.

The number of U.S. adults who say they always tip for services (servers at a sit-down restaurant, hairstylists/barbers, food delivery people, taxi/rideshare drivers, hotel housekeepers, coffee shop baristas and when picking up takeout food) has declined in every category except one.  The exception: Roughly two-thirds of Americans (66 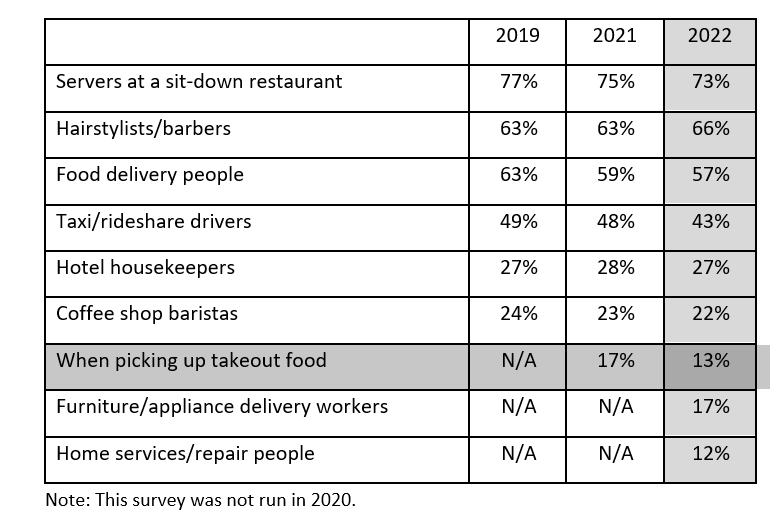 While there seems to be a clear consensus that waitstaff should be tipped, there is quite a bit of confusion about whether or not people should be tipped for providing other services. Here’s how often those Americans who use each of the following tip the other service providers listed in the survey:

While the median is 20% for all generations, the averages are much higher for Gen Zers (26%) and millennials (24%). Gen Xers leave an average tip of 20% and boomers give 19% on average. But remember, over four in ten (43%) combined Gen Z and millennial restaurant goers leave nothing at least some of the time. These figures are among those who tip.

Men and women both give a median tip of 20% at restaurants, but the average is a little higher among men (22% vs. 20% for women). This is another instance, though, of a group (men, in this case) tipping a little better on average but also being more likely to leave nothing.

It has become somewhat commonplace to be offered a “suggested” tip amount by the establishment or service provider when paying the bill. Among people who have encountered suggested tip amounts (for example, at a coffee shop, a food truck, a taxi/rideshare, etc.), most (62%) say their tipping habits are about the same. More than a quarter (26%) are inspired to tip more (7% much more + 18% somewhat more), while 12% tip less as a result (5% much less + 7% somewhat less).

Younger generations are more likely to be impacted by the suggestions. Gen Zers (40%) are the most likely to tip more after seeing these recommendations, followed by millennials (37%), Gen Xers (22%) and boomers (14%).

Who Actually Qualifies for the Employee Retention Credit?