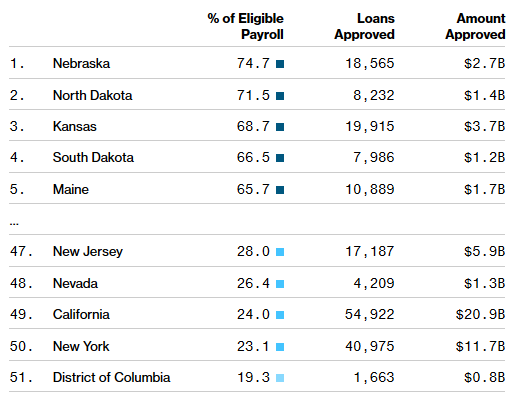 (Visit Bloomberg News to expand list and show all states.)

Those findings, based on Evercore ISI estimates of eligible payrolls in each state, show the uneven distribution of the first $248 billion of Small Business Administration coronavirus-relief loans, through April 13. Under the Paycheck Protection Program, Congress authorized forgivable loans equal to 2 ½  times monthly payroll for businesses with fewer than 500 employees. The SBA is using thousands of banks to process applications and distribute the $349 billion that Congress appropriated. As of Thursday, the fund was depleted, and while both parties support expanding the program, Congress hasn’t yet voted to do so.

Ernie Tedeschi, the Evercore analyst who calculated the eligible payroll figures, offered a few theories about why the imbalance arose in an April 15 note. One was that regions hit harder by the virus, or that had the earliest lockdowns, may have had more trouble getting lending started. Another was that more businesses in hard-hit states may not have applied because the program isn’t enough to make a difference for them. Tedeschi also floated the possibility that businesses in some states had better pre-existing relationships with community banks that were able to get applications submitted quickly.

Whatever the reason, it’s inevitable that the results will be politicized, since coastal states tend to favor Democrats, and Republicans dominate the country’s center. When Jackie Speier, a Democratic congresswoman from California, asked on April 15 why Texas got more money than California, her tweet was retweeted more than 3,000 times. “California has been shortchanged,” California Governor Gavin Newsom, also a Democrat, said at a press briefing. “We’re trying to understand exactly why.”

Awards Recognize the ‘Most Powerful Women’ in the Accounting Profession

Report Looks at Goodwill Impairments Throughout the COVID-19 Pandemic