Corporate taxation has never been an easy task. This is especially true for those that oversee corporate state tax compliance as states do not consistently conform to the Internal Revenue Code (IRC). The passage of the 2017 Tax Cuts and Jobs Act (TCJA) added to this challenge by creating significant uncertainty regarding the states’ response to “full expensing” (i.e., the new 100 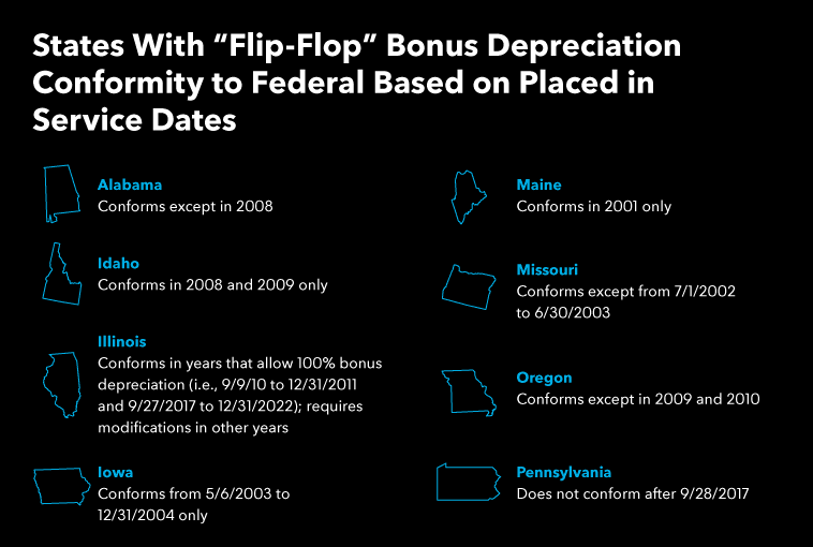 Caption: Companies with assets in “flip-flop” states should determine whether there are any depreciation impacts in open tax years and continue to monitor these states due to their complexity.

For most companies, Excel is the go-to tool used to keep track of these complicated modifications. However, as tax and accounting professionals chartered with managing bonus depreciation can attest to, the pitfalls of Excel – time-consuming, error-prone and cumbersome – apply more than ever. One way to combat some of the Excel challenges is to maintain separate depreciation books for each state with the correct bonus depreciation configurations by period. While still time consuming, this approach enables taxpayers to compare the detailed depreciation differences from the federal and state books without manually tracking and accumulating modifications from year to year.

Consequently, a state that does not allow (also known as non-conforming) bonus depreciation creates differences in federal and state adjusted basis. As such, maintaining accurate records is critical. This is because when it comes time to dispose of the asset, any accumulated basis differences will result in a difference between the gain or loss reported at the state and federal levels.

Rather than track modifications to state depreciation over time to arrive at state adjusted basis, maintaining a separate state depreciation book can reduce reconciliation times and help to ensure accuracy. Consider the example below.

Looking to the future, calculating asset depreciation for flip-flop states will not likely get any easier. If your company only has a few assets to manage, then a singular Excel database is a reasonable solution. For large companies with thousands of assets across multiple states to track, creating separate depreciation books for each state is still extremely time consuming, error-prone and cumbersome, but at least taxpayers are able to compare the detailed depreciation differences from the federal and state books without manually tracking and accumulating modifications from year to year.  In addition, rather than track modifications to state depreciation over time to arrive at state adjusted basis, maintaining a separate state depreciation book can reduce reconciliation times and help to ensure accuracy. The ultimate solution, however, is depreciation software that has state depreciation rules built in and stays up to date with new tax laws automatically.

Employees across the country have been empowered by the transformations in the world of work. The priorities of employees have evolved post pandemic. FlexJobs, a job site for flexible employment, reported 16 percent of 7,300 workers surveyed said they ...

3 Trends for Accounting Firms in 2022

Firms willing to adopt new technologies and prioritize employee and client experiences will be in an ideal position to attract new clients and keep current clients happy. Here are three trends to know for the coming year.

Cyber Monday Sales on Track to Break Record Despite Inflation

How to Prepare for a Recession: Make Your Accounting Firm Recession-Proof