Small business and large corporations will likely not have to worry about the additional tax burden arising from the forgiveness or cancellation of their Payroll Protection Program loans in the majority states, according to Bloomberg Tax & Accounting’s 21st annual Survey of State Tax Departments.

The information in the Payroll Protection Program loan forgiveness infographic, as well as the other information discussed in the article, is based on the states’ responses to the Bloomberg Tax and Accounting 2021 Survey of State Tax Departments. The states were asked to respond to this based on their laws as of January 1, 2021, and, as a result, their responses may not take into account any changes to their laws effective after that day. Additionally, the states’ responses do not always accurately reflect their actual laws, regulations, or guidance. It is important to keep in mind that the survey results are not binding on the states and, in the majority of cases, are not considered official administrative guidance. For these reason, we suggest using the states’ responses as a starting point for determining the state’s position on issues addressed by the survey, but then conducting your own independent research to verify that their responses are aligned with their current rules.

In this case, however, it does appear that California’s, Hawaii’s, and North Carolina’s responses regarding their conformity to section 1106(i) of the CARES Act are correct. All three states have issued guidance stating that Payroll Protection Plan loan forgiveness amounts will not be included as taxable income. See California FTB February 2021 Tax News; Hawaii Tax Information Release No. 2021-05 (July 2, 2021); and North Carolina Important Notice: Reference to the Internal Revenue Code Updated – Impact on North Carolina Corporate and Individual Income Tax Returns (revised Oct. 1, 2020).

Twenty-nine state tax departments responded they will follow the federal treatment of such forgiveness or cancellation under section 1160(i) of the CARES Act and will not treat these amounts as taxable income. An executive summary of the survey, which incorporates input on a wide range of corporate income and sales tax issues from senior state tax department officials from all 50 states, Washington, D.C., and New York City, is available at http://onb-tax.com/pDzj50FbPp2.

The 2021 Survey of State Tax Departments focuses on the continued impact of the Covid-19 pandemic on areas that matter most to corporations: federal conformity, nexus issues, state sourcing provisions, the taxation of pass-through entities, the transition to economic nexus, and state tax policy for marketplace facilitators. The survey also explores how states are implementing their economic nexus rules post-South Dakota v. Wayfair, with a focus on economic nexus threshold calculations. 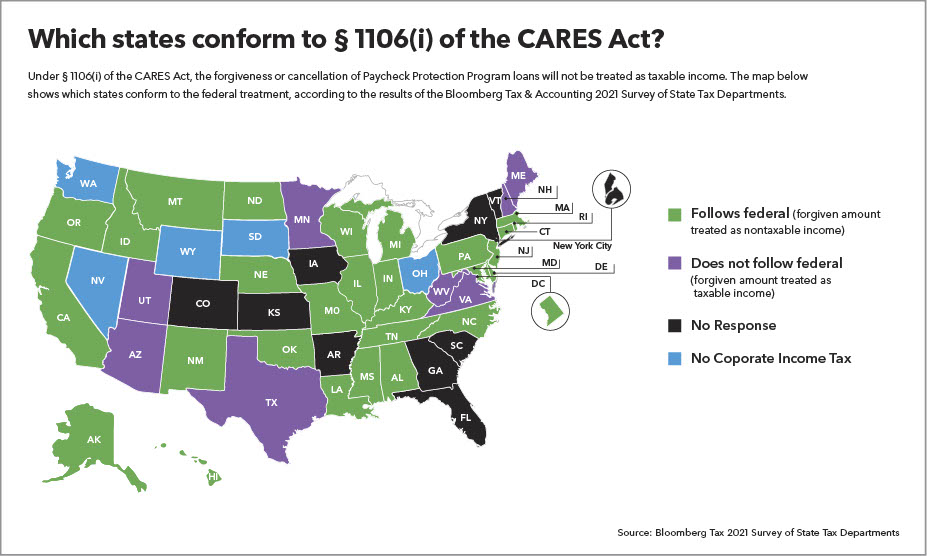 “Over the past 15 months, businesses have had to evaluate the numerous state taxation policies that emerged in response to Covid-19 and determine the evolving impact on their current and future workplace and business models,” said Christine Boeckel, director, state tax analysis and content, Bloomberg Tax & Accounting. “Our survey provides key insights into shifting state policies and provides much-needed clarity to tax professionals by presenting the states’ own interpretations of their rules and procedures as they adapt to new business paradigms.”

“The Bloomberg Tax survey provides an excellent high-level view of what multistate companies and tax practitioners face on a daily basis: a complex and non-uniform enforcement landscape,” said Matt Hedstrom, partner, Alston & Bird. “This complexity is only increasing, and this survey does a great job laying out the nuances that exist in this rapidly shifting landscape.”

Other key takeaways from the survey include:

Report: Long COVID is Keeping as Many as 4 Million People Out of Work