The findings reflect data from five countries and are good news for e-commerce merchants, ClearSale says, but they also highlight the need for merchants to adjust their fraud screening tools to reflect changes in consumer behavior.

ClearSale analyzed April 2020 e-commerce customer data from clients in five of its major markets: the U.S., Canada, Australia, Mexico and Argentina—all countries where some form of lockdowns were in effect. The analysis showed that across all five countries, the average number of brand-new online shoppers rose by 12% between March and April.

“To get this data, we used known email addresses as a proxy for existing customers,” said Rafael Lourenco, Executive Vice President and Partner at ClearSale. “Email addresses for shoppers that weren’t already in our fraud-prevention database or one of our partners’ databases represent new shoppers in our analysis.”

Using this approach, the portion of April’s total number of shoppers who were already known to buy online dropped in every country in the study. 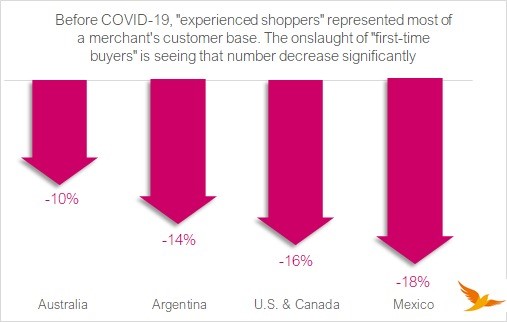 Decline in Percentage of Known Customers.Comparison Period: April 2020 versus March 2020

“The percentage decrease in known customers represents new customers entering that market,” Lourenco said. “This data leads us to think that more people who’ve never shopped online before are turning to e-commerce as their only or preferred option during quarantine.”

Acquiring new customers is an ongoing goal for merchants. However, Lourenco cautions that unless sellers and fraud-prevention professionals adjust their rules and algorithms, they risk turning away these new shoppers by mistake.

“In normal times, fraud filters would flag a never-before-seen email address as possible fraud. That’s because fraudsters often create new email addresses to use when they shop with stolen cards. But now, consumers are behaving in new ways as they cope with the crisis. So, merchants need to assess orders with unknown email contacts differently, to avoid losing revenue and turning away good customers who might not return.”

An Aite Group report commissioned by ClearSale found that false positives—rejecting good orders by mistake—could cost merchants as much as $443 billion by 2021, far more than the total lost to fraud. To avoid falsely declining new customers, Lourenco recommends turning off automatic rejection of flagged orders and reviewing them manually before decisioning.

The full Aite Group/ClearSale report can be downloaded at https://offer.clear.sale/false-declines-ecommerce-fraud-prevention-report.

Report: Long COVID is Keeping as Many as 4 Million People Out of Work